It’s the third day of September (at least I hope it still is by the time I get this done) and I’ve realized yet again that I’ve only published one blog post last month. Heck, besides just recently, I barely even opened my drafts folder to work on a post. It’s so annoying because I used to be able to blog so easily before. To be fair, I rarely put any thought or effort on my posts back when I was a wee “blogger.” My posts used to be just pure, unadulterated teenage drivel.

Now that I’m older I’m aiming for more, shall we say, substantial blog posts. Quality is what I’m going for on this blog, not quantity. I want to write blog posts that actually have some thought and meaning to them. Blog posts that I actually bothered to make an effort to be something worth reading. Blog posts that I can read back and not roll my eyes to oblivion for being so feckless and unnecessary.

Not this blog post though. This post is to just make sure that I don’t have two posts of the same subject (The Oremere Chronicles) published right next to each other. I don’t want people to think that I’ve done nothing since then.

So here are the books I read in August. It’s a mixed bag, this month’s reads. Graphic novels, a non-fiction account, two disappointing old timey books, and an absolutely magical magic book that I’m currently obsessed with.

★★☆☆☆
This book absolutely blew my mind. And not in a good way. Refining Felicity is supposedly a Regency period novel yet it’s so… not at all Regency-like. The words “slut” and “bitch” are thrown around which shocked me because the last (and only) Regency novel I read considered “damn” as obscene. The characters were colorful but uninteresting at the same time. The romantic couple in this book would have been cute if it weren’t for the fact that the guy was in his 30s and the girl was barely 20. Also the guy assaulted the girl and it was painted as a romantic moment. What the frick.

I gave this two stars though because there were certain lines that made me laugh.

Summary from GoodReads:
The eccentric Lesley family could not agree on what to name Lorraine’s new baby girl even after four months. Lorraine secretly liked the name Marigold, but who would ever agree to such a fanciful name as that? When the baby falls ill and gentle Dr. M. Woodruff Richards saves her life, the family decides to name the child after the good doctor. But a girl named Woodruff? How fortunate that Dr. Richards’s seldom-used first name turns out to be . . . Marigold! A child with such an unusual name is destined for adventure. It all begins the day Marigold meets a girl in a beautiful green dress who claims to be a real-life princess. . . .

★★☆☆☆
This was a really disappointing read. If you know anything about me, you know that I’m a fool for LM Montgomery. I adore her books and can devour them in one sitting. Magic for Marigold however is the exception. It’s just so… boring. Marigold is so boring. The people around her are so boring. Even the family drama was boring. I mean, after reading Montgomery’s A Tangled Web, the family hoopla in this novel just felt repetitive. It even ends on a boring note.

Also, I didn’t realize how misleading the summary was. What do you mean the story begins when Marigold meets that annoying kid who claims to be a princess? That was one chapter and the incident was never mentioned again! What a scam.

Two stars though because, as I said, I’m a fool for Lucy Maud.

Summary from GoodReads:
You know this door, this strange portal that you once opened and walked through.

You met dozens of things that most still believe are merely figments of fiction and fancy.

And you met a man, Alejandro Pardo, who spent his lifetime chronicling these things, these creatures.

The door’s open now. So walk through it again.

Meet other men and women who’ve witnessed just how deep the shadows really are.

And of course, meet what lurks furtively in them.

★★★★☆
I didn’t expect to see a companion anthology to The Lost Journals of Alejandro Pardo but boy am I glad that I did. While Lost Journals gave us a hint of Alejandro Pardo’s adventures, The Black Bestiary tells us that Alejandro actually had more adventures and also he was probably an asshole. And apparently there’s a war against humans and the aswang now. Pretty neat, I would say. Hopefully, there’s more of this anthology to come.

It wasn’t long before the media got wind of the new Web site where anyone–not just teenagers and weed dealers but terrorists and black hat hackers–could buy and sell contraband detection-free. Spurred by a public outcry, the federal government launched an epic two-year manhunt for the site’s elusive proprietor, with no leads, no witnesses, and no clear jurisdiction. All the investigators knew was that whoever was running the site called himself the Dread Pirate Roberts.

★★★★☆
My father got this book for some reason but I don’t think he liked it all that much because he left it in the passenger seat of our car. I started skimming it during our road trip to Negros and found myself rather hooked. The author really knew how to tell Ulbricht’s story. I particularly liked the multiple POVs that gave us differing and contrasting opinions on the drug war. On one hand, the author managed to explain why Ulbricht thought he was doing good; on the other hand, he framed it in such a way that makes it obvious that Ulbricht was full of shit. 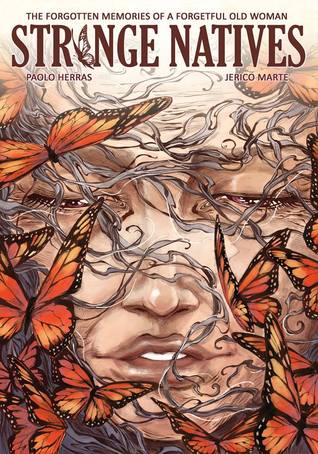 Summary from GoodReads:
How much of our native land can you remember?Our past has been rewritten, reimagined, and forgotten by invaders, colonizers, and fellow natives. How much of our past are you certain to be true? Nobody knows. Strange, isn’t it? Our past is lost forever as we embrace a more worldly future. Leaving us all strangers in this native land, just like Grasya, a forgetful old lady and her forgotten memories.

★★★★☆
This is one of my favorite things I bought during the Cebu LitFest. I didn’t know what to expect from this graphic novel. The art was gorgeous and the prose was poignant. Not gonna lie, I may have teared up at some points.

Summary from GoodReads:
Of all the folks in the mountain shacks, the Casteels were the lowest — the scum of the hills.
Heaven Leigh Casteel was the prettiest, smartest girl in the backwoods, despite her ragged clothes and dirty face…despite a father meaner than ten vipers…despite her weary stepmother, who worked her like a mule. For her brother Tom and the little ones, Heaven clung to her pride and her hopes. Someday they’d get away and show the world that they were decent, fine and talented — worthy of love and respect.
Then Heaven’s stepmother ran off, and her wicked, greedy father had a scheme — a vicious scheme that threatened to destroy the precious dream of Heaven and the children forever!

I didn’t dislike the book. When you pick up an Andrews’s book, you pretty much know what you’re in for. But although I was quite hooked, I couldn’t rate this book any higher than three stars. For crying out loud, a thirty-year-old man sleeps with his adopted teenage daughter!

Summary from GoodReads:
Magic is a con game.

Kellen is moments away from facing his first mage’s duel and the start of four trials that will make him a spellcaster. There’s just one problem: his magic is gone. As his sixteenth birthday approaches, Kellen falls back on his cunning in a bid to avoid total disgrace. But when a daring stranger arrives in town, she challenges Kellen to take a different path. Ferius Parfax is one of the mysterious Argosi – a traveller who lives by her wits and the three decks of cards she carries. She’s difficult and unpredictable, but she may be Kellen’s only hope…

★★★★★
Phenomenal read. I won’t talk about it too much since I’m currently writing a book review of it. I’ve got the first draft of it done and, if all goes well, it will be up by this week.

Summary from GoodReads:
Every legend hides a lie

A Tikbalang prince plots vengeance
for the death of his father.

And the Queen of the Asuang
unleashes the mythical Bakunawa
upon the streets of the city.

Caught in their age-old struggle is Andoy.
a crippled orphan that discovers
he is the fulfillment of a prophecy
dating back to Lapu-Lapu himself

★★★★★
I’d seen this graphic novel in National Bookstore several times but never got too interested in it since it seemed to focus more on the Skygods (I’m more of a creatures of lower mythology type of gal). But then I read a review that mentioned my girl Trese’s involvement in this two-part graphic novel and I knew I just had to get it. The story is really interesting, dating back nearly a millennium. Several POVs were featured but my favorite story arc was the tikbalang prince’s. Poor dude just couldn’t get a break.

Summary from GoodReads:
Nita Callahan is at the end of her rope because of the bullies who’ve been hounding her at school… until she discovers a mysterious library book that promises her the chance to become a wizard. But she has no idea of the difference that taking the Wizard’s Oath is going to make in her life. Shortly, in company with fellow beginner-wizard Kit Rodriguez, Nita’s catapulted into what will be the adventure of a lifetime — if she and Kit can both live through it. For every wizard’s career starts with an Ordeal in which he or she must challenge the one power in the universe that hates wizardry more than anything else: the Lone Power that invented death and turned it loose in the worlds. Plunged into a dark and deadly alternate New York full of the Lone One’s creatures, Kit and Nita must venture into the very heart of darkness to find the stolen, legendary Book of Night with Moon. Only with the dangerous power of the wizardly Book do they have a chance to save not just their own lives, but their world…

★★★☆☆
I read this book upon recommendation on a certain Twitter thread about books that had great magic systems. I’m obsessed with magic systems so I knew I had to give this one a go. While I enjoyed the first part – the part where the main characters were getting to know their abilities and whatnot – I didn’t really like the bulk of the novel, the part where the kids get stuck in another world. It wasn’t really my cup of tea. Still, I can see why people love this book so much.

And there you have it, folks. As you can see, I read nine books in August which is only one book short of my set monthly goal. Not bad, I would say. Especially considering how bad I am at reaching my goals. Obviously, my favorite book this month was Spellslinger. Least liked book would have to be Refining Felicity.

Here’s to reading even more books (hopefully ones from my massive TBR shelf) this month. Only 34 books left until I hit my Reading Challenge goal. Yay!