(For once, a spoiler-free review)

Despite being a self professed hardcore Anne fan, I only heard about this TV series sometime last year through a kindred spirit. One of the first things my friend told me about this new adaptation was that a lot of people didn’t seem to like its supposedly dark and mature tone. Critics of the show lambasted the “gritty reboot” for ruining the whimsical, fanciful Anne Shirley they grew up with. After all, Anne of Green Gables is a children’s book and to give it such a gloomy treatment is going against the original spirit of Montgomery’s timeless classic.

Just as with every controversy concerning books, I got intrigued and vowed to watch the show in its entirety. What did reviewers mean that it was too “dark” and “gritty”? Was it going to be like that train-wreck of a teen drama and in-name-only adaptation of the Archie comics, Riverdale? Was Anne going to be a duplicitous, promiscuous gal with malevolent designs for the Cuthberts? Was Mrs. Rachel Lynde going to have a secret addiction to opiates of which she desperately struggles to quit but simply can’t anymore after decades of abusing the drug? Was there going to be a huge, mysterious, gruesome murder at the Barry household that will take the whole run of the show for Anne and the gang to solve?

The way negative reviews put it, you’d think that Anne with an E was going in the same unnecessarily violent, comically bleak, wholly detached from the source material as Riverdale, complete with gangbangers and school drug busts. However, after watching all seven episodes of Anne with an E, I can, in good conscience, say that this series is one of the more faithful adaptations of the book and is by far my favourite adaptation. And yes, that includes the 54-episode anime that I adore.

I can understand why some people thought the show was too dark for an Anne of Green Gables adaptation but, honestly, there wasn’t really that much in this new series that wasn’t already present in the book. Granted, in the original text, Anne just alludes to her time at the orphanage and her employment at different households. And even Anne’s language mostly sugar-coated her hardships. I distinctly remember reading the book for the first time when I was sixteen and being baffled at Anne’s nonchalance when talking about her pre-Green Gables life. What’s more baffling was everyone else’s reactions. No one seemed to think much about Anne’s previous hardships. They were more concerned about Anne’s flaming red hair than her childhood traumas.

If previous adaptations viewed Anne’s story with rose-colored glasses that erased the uncomfortable truths that came with that historical era, Anne with an E viewed it with corrective lenses with which you can see what Montgomery only hinted at: the domestic abuse, the child labor, the prejudice against orphans, and the lasting effects of all of this on eleven-year-old Anne (though she’s thirteen in the show).

Anne with an E doesn’t shy away from the painful reality in L.M. Montgomery’s story. Anne gets flashbacks from her tragic past and even suffers PTSD as she tries to adjust to Green Gables. It’s heart-wrenching to see my – our – beloved Anne Shirley suffer so explicitly. I’m not ashamed to say that more than just a few tears flowed down my face whenever I saw Anne in pain but they’re nothing compared to the awe I felt for Anne upon the realisation that, despite everything she’s been through, she’s still a lovable ray of sunshine, determined to be the best that she could be. Her terrible experiences didn’t warp her into a terrible person. Instead, she fights back against the horrors of her life by honing her powerful imagination. That’s both heartbreaking and inspiring. 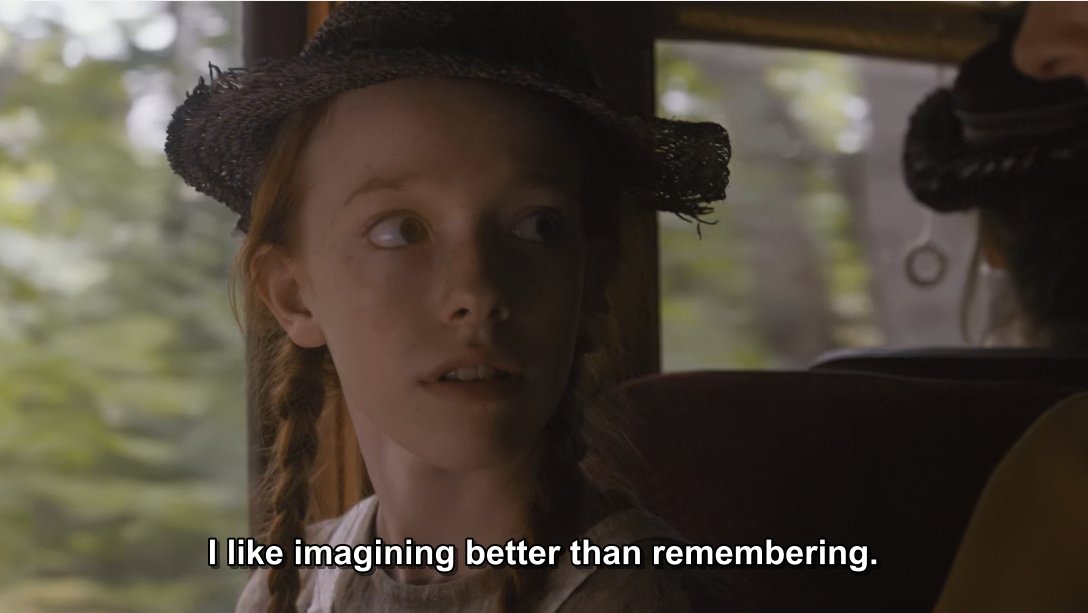 I always knew that Anne Shirley was strong but this adaptation showed me exactly how strong and resilient this child is.

Anne, unlike previous interpretations, is an emotional roller-coaster, with ups and downs that make the ride so thrilling and intense. It’s not all laughs and whimsy. More so, it doesn’t lean too heavily on the romantic angle that majority of adaptations highlight. Thank god. I mean I love the canon romance but I’ve never been down with the way most movie adaptations make the relationship all cutesy and fluffy. They didn’t even officially became friends until the end of the book! And they didn’t get together romantically until the third!

This show has a more dramatic take on the story, which contrasted with the overly saccharine previous adaptations. However, I think it’s really impressive how the writers connected together the events of the book using drama. The show is more cohesive than the book, to be honest. See, the book is pretty episodic. Each chapter chronicled a certain event – usually Anne getting into her trademark scrapes – with no particular overarching plot. By altering the timeline a little and tweaking things here and there, Anne has a more solid story. Minor characters are even fleshed out. The show takes a lot of liberties like the individual romances of the Cuthberts but you could tell the writers were careful not to tailor previously unknown backstories too outrageously. Just enough to give the audience a better understanding as to why the character turned out the way they did. I mean, I felt like I got to know Marilla better in the seven episodes of the series than I did in the entire book series. And there are eight installments in the series, all of which I’ve read.

Admittedly though, Anne of Green Gables as a television drama took some time to get used to. However, the show included a lot of the familiar yet still heartwarming scenes or elements that made the original such a delight so there was a good balance.

I want to end this rambling mess of a “review” by saying that Anne with an E isn’t edgy just for the sake of it. Hell, I wouldn’t even describe it as edgy so much as realistic. The original Anne of Green Gables might have been a children’s book but this show is for adults. It’s Anne’s story told with an unflinching, keen eye to what really happened – or would have happened – at that point in history. And I think we all know that things were not great for a lot of people – unlucky orphan girls especially – back in the 1900s.

Honestly, it’s about time Anne’s story is told realistically. I loved the fun and lightheartedness of previous interpretations but Anne Shirley deserves more than that.  Anne with an E doesn’t mar Anne’s legacy but strengthens it. I can’t wait for season 2.